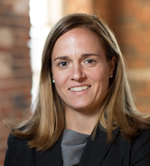 Chair Charlotte Mitchell was appointed to the North Carolina Utilities Commission by Governor Roy Cooper for a term that commenced on July 1, 2017 and ends on June 30, 2023. Born and raised in Houston, Texas, Mitchell moved to North Carolina to study at UNC-Chapel Hill as a Morehead Scholar. She earned a B.A. in Anthropology and Romance Languages at UNC-Chapel Hill, where she also lettered in Women’s Soccer. She earned a Juris Doctor from UNC-Chapel Hill, serving as Publication Editor for the North Carolina Law Review, as well as a Master of Environmental Economics and Policy from Duke University’s Nicholas School of the Environment.

Prior to joining the Commission, Mitchell engaged in the private practice of law, focusing on energy, environmental and land use regulatory matters. She is a member of the North Carolina Bar Association and she is a former member of both the NC Mining and Energy Commission and NC Sedimentation and Control Commission. She is active in civic and community affairs, having recently served on the Board of Directors of the Women’s Center of Wake County and as a Wake County Guardian ad Litem. She resides in Raleigh, North Carolina. 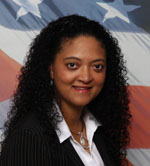 Commissioner Brown-Bland was appointed to the North Carolina Utilities Commission by Governor Beverly Eaves Perdue in 2009 and re-appointed in 2017 by Governor Roy Cooper. She currently serves on the Executive Committee of the National Association of Utility Commissioners (NARUC) as Treasurer; Co-Chair of the NARUC Washington Action Committee and a member of both NARUC’s Critical Infrastructure and Gas Committees. In addition, she currently serves on the Board of Directors of the National Regulatory Research Institute, of which she is past Chair, as President of the National Council on Electricity Policy, and on the Advisory Council for the Center for Public Utilities at New Mexico State University. She is a Past President of the Southeastern Association of Regulatory Utility Commissioners.

She is a Phi Beta Kappa graduate of the University of North Carolina at Chapel Hill and received her Juris Doctorate from Duke University School of Law.

She joined the North Carolina Department of the Secretary of State in 2001, serving as Director of the Business License Information Office and of the Charitable Solicitations Licensing Section. Brown-Bland’s experience in utility regulation began in 2002, when she accepted a position with the North Carolina Utilities Commission as an attorney in the Legal Division. From 2005 until her appointment to the Commission, she served as Associate General Counsel with the City of Greensboro.

Commissioner Brown-Bland has a history of community and civic service, having served on several boards including the Greensboro Bar Association, the Alamance County Historical Museum, and Western Piedmont Residential Services, a non-profit organization that provided residential service to autistic adults. 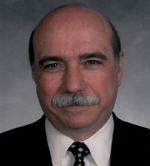 Commissioner Clodfelter was appointed to the North Carolina Utilities Commission by Governor Roy Cooper for a term that commenced on July 1, 2017 and ends on June 30, 2023.

A native of Thomasville, NC, Clodfelter earned bachelor's degrees from Davidson College and Oxford University as a Rhodes Scholar, and a law degree from Yale Law School. He served as law clerk for Judge James B. McMillan, Jr. of the U.S. District Court for the Western District of North Carolina from 1977-78.

Before joining the Commission, Clodfelter was in private practice with the law firm of Parker Poe Adams & Bernstein, LLP in its Charlotte office, where he was a member of its Bankruptcy, Reorganization and Creditors’ Rights practice group. Prior to joining Parker Poe in 2014, he had been in private practice for many years with Moore & Van Allen, PLLC.

In April 2014, the Charlotte City Council appointed Clodfelter to serve as Mayor of Charlotte to complete the unexpired term of a former mayor. He served in that position until December 2015. Clodfelter has also been active over the years as an officer and board member of numerous local and statewide community and civic organizations. He has served as a Trustee of the Z. Smith Reynolds Foundation since 1982.

Clodfelter and his wife Elizabeth currently reside in Charlotte. They have two adult children. 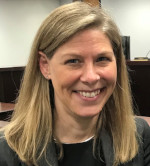 Commissioner Kimberly W. Duffley was appointed to the North Carolina Utilities Commission by Governor Roy Cooper for a term commencing on July 1, 2019 and ending on June 30, 2025.

A native of North Carolina, Commissioner Duffley received a Bachelor of Arts in Philosophy and Political Science from the University of North Carolina at Chapel Hill. She earned a Juris Doctor from Mercer School of Law.

Commissioner Duffley’s interests include art, travel and reading. She and her husband live in Raleigh and have two children. 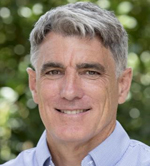 Commissioner Jeffrey A. Hughes was appointed to the Utilities Commission by Governor Cooper for a term commencing July 1, 2019 and expiring June 30, 2025. Commissioner Hughes joins the Commission after having been with the UNC School of Government since 2002. He has more than 25 years of experience assisting communities in addressing finance and policy challenges related to the provision of environmental services and programs.

Hughes is the author of numerous reports, guides, and articles on environmental finance and environmental policy analysis subjects. He has worked with a range of state and national organizations that focus on utility and environmental issues. He is an active member of Council of Infrastructure Finance Authorities (CIFA) and the American Water Works Association (AWWA). Hughes was the director of the Environmental Finance Center at the School of Government.

His research and teaching interests include service pricing, economic regulation, and public finance. He was named Albert and Gladys Hall Coates Distinguished Term Lecturer for 2012 - 2014. Prior to joining the university, Hughes worked as a finance specialist for RTI International where he managed utility finance and governance projects throughout Central Europe and Africa including a yearlong position as an infrastructure finance advisor to the Polish government. Hughes also worked briefly as a utility director for a small rural community in North Carolina. He earned a master’s degree in environmental engineering from the University of North Carolina at Chapel Hill and a bachelor’s degree in engineering from Duke University. 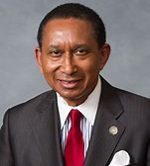 Floyd B. McKissick, Jr. was nominated to serve on the North Carolina Utilities Commission by Governor Roy Cooper for a six-year term commencing July 1, 2019, and expiring June 30, 2025. His nomination was confirmed by the NC Senate and the NC House.

Commissioner McKissick served as a member of the North Carolina Senate for approximately 13 years, where he served as the Senior Deputy Democratic Leader prior to his appointment to the Utilities Commission.

Commissioner McKissick is the son of the late civil rights leader and attorney, Floyd B. McKissick, Sr. He received an A.B. Degree in Geography from Clark University in Worcester, Massachusetts. He received a master’s degree in Regional Planning (MRP) from UNC-Chapel Hill, a master’s degree in Public Administration (MPA) from Harvard University and a Juris Doctor (J.D.) Degree from the Duke University School of Law in Durham, North Carolina.

Commissioner McKissick has practiced law since 1984 with several law firms, including Dickstein Shapiro & Morin in Washington, D.C., as well as Faison, Brown, Fletcher & Brough in Durham, North Carolina. He established a practice known as McKissick & McKissick in 1990, where he specialized in Civil Litigation. He has represented Fortune 500 corporations, as well as small businesses and many individuals.

Commissioner McKissick has moderated panels at conferences sponsored by NARUC, as well as the New Mexico State University Center for Public Utilities. 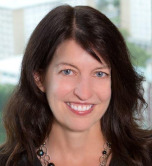 Commissioner Kemerait was appointed to the North Carolina Utilities Commission by Governor Roy Cooper for a term that commenced on May 2, 2022 and ends on June 30, 2027. Born and raised in Indialantic, Florida, Commissioner Kemerait came to North Carolina to attend Davidson College, where she was captain of the cross country and track teams and was student government class president. She earned a Bachelor of Arts in English from Davidson College and a Juris Doctor degree from Wake Forest University School of Law. After graduating from law school, she served as a law clerk for Judge Elizabeth McCrodden of the North Carolina Court of Appeals.

Prior to joining the Commission, Commissioner Kemerait was in private practice with the law firm of Fox Rothschild LLP in its Raleigh office, where she focused her practice on energy and water and wastewater regulatory matters and land use matters. Commissioner Kemerait is a former Chair of the City of Raleigh Board of Adjustment and a member of the North Carolina Bar Association. She is active in a variety of civic and community organizations.

Commissioner Kemerait lives in Raleigh, North Carolina, and she has three sons.